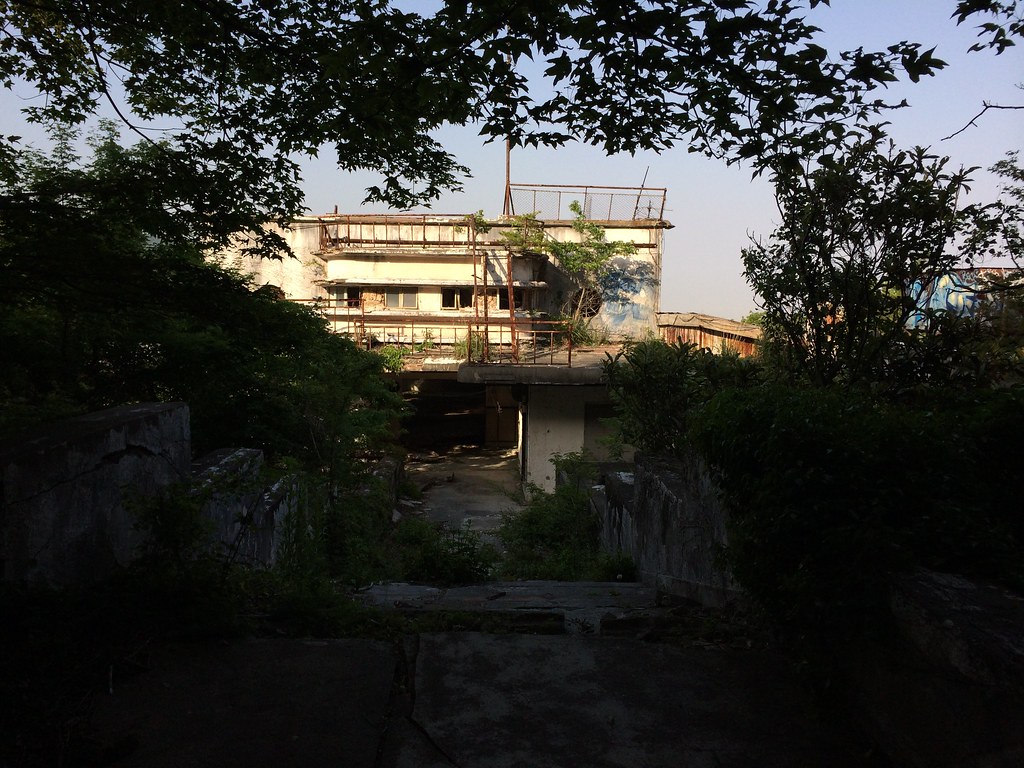 Mount Maya in Kobe, Japan is notable for a few reasons. First, it’s one of the major peaks of Hyogo Prefecture’s Rokko mountain range. Second, the view from it is considered to be one of the best in Japan. Third, it houses the Mayazan Tenjō-ji Buddhist temple. And finally, nestled into the side of the mountain are the abandoned remains of one of the most famous haikyo in all of Japan: The Maya Kanko Hotel of Kobe, once an Art Deco-style jewel now long since fallen into disrepair. It’s still visible from the Nijinoeki (in English, “rainbow”) station of the Maya Viewline ropeway; what’s more, efforts have begun in recent years to preserve the site from further decay. Still, though — it’s unlikely that the hotel will ever open visitors again.

It’s too far gone for that.

In Japanese, the word “haikyo” refers both to abandoned places and to the act and culture of urban exploration more generally. Written as 廃墟, the characters that comprise the word mean “useless” or “obsolete” and “hill,” making its literal translation “obsolete hill”; however, it’s usually translated as something along the lines of “ruin.” If you’re familiar with Nara Dreamland just outside of Osaka, that’s sort of the quintessential haikyo — but it’s far from the only haikyo in Japan. Indeed, in recent years, appreciation of haikyo — both the hobby and the locations themselves — has been on the rise, with the Maya Kanko Hotel being among its finest examples.

Originally constructed in 1929 by the Maya Cablecar Company, the hotel, then called Club Maya, was intended to capitalize on the tourist trade brought in by the company’s funicular railway, which had opened a few years earlier in 1925. And for a time, it did just that: Built in the Western Art Deco style, it offered a beautiful dining room, an auditorium and ballroom with stunning chandeliers, a relaxing onsen, and of course spectacular views from the side of Mount Maya. For visitors journeying to Mount Maya to see Tenjō-ji at the mountain’s peak, the hotel provided both a comfortable and convenient stopping point.

However, the funicular’s service was cut in 1944 due to the Second World War. During this time, the hotel was used to house anti-aircraft guns and functioned as one of Kobe’s lines of defense. Like most of Japan’s large cities, Kobe was bombed heavily during the war, leading to large-scale destruction — including that of Club Maya. The funicular resumed service in 1955, with the hotel itself being rebuilt and reopened under a new name — the Maya Kanko Hotel — in 1961. During the 1967 Pacific Typhoon Season, however, the hotel was again badly damaged, leading to yet another closure

In its final life, the building was restored and reopened once again in 1974 as a student center; however, although it remained open for roughly two decades, it was seldom used. Around this time, the original Tenjō-ji temple also burnt to the ground; standing since 646 BCE, it became the victim of an arson attack in 1976. (It was later rebuilt not too far away from its original location.) The student center closed in 1993 — and after the Great Hanshin Earthquake struck in 1995, the area was deemed to unsafe to allow continued access and subsequently sealed off. The earthquake devastated the region, killing more than 6,000 people, some two-thirds of whom were from Kobe. The Maya Kanko Hotel’s days as an operational structure thus ended, it’s been abandoned ever since, slowly growing back into the mountain on which it was built.

But you can still see it — both legally and, uh… a little less legally. Should you take the Maya Viewline, you’ll be able to see the roof both from the air and while stopped at Nijinoeki Station. You can also take a tour of the area for 4,000 yen (about $35 USD); the tour includes a ride on both the Maya Cablecar and the Maya Viewline ropeway, as well as a walk around the Maya Kanko Hotel and Tenjō-ji ruins. Note, though, that the tour doesn’t go inside either building. Or, if you’re feeling adventurous, you can embrace the haikyo lifestyle and try to hike to the location.

It is not recommended that you actually attempt to venture onto the property on your own; it may not be strictly legal, and you’ll likely get in a whole mess of trouble if you’re caught. Reports from various sources state that police and/or ropeway workers are plentiful in the area, for one thing; for another, the former hiking paths are no longer kept up or marked; and for one more, although preservation efforts are in the works, the hotel is literally collapsing in on itself. It’s not a safe trip for a variety of reasons, and the likelihood that something will go wrong is pretty high. That hasn’t stopped loads of haikyo and other urban explorers from making the journey, though, so if you’re interested in reading about what it’s like to visit, a brief search will bring up no shortage of first-hand accounts.

There’s good news, too: Crowdfunding efforts launched in 2017 raised 7,277,000 yen — around $65,000 — which will be used to preserve the site and prevent it from falling further into decline. Even if it never again reaches the heights of its former grandeur, it will remain a venerable piece of history, and well worth experiencing if possible.

Just because something is falling apart doesn’t mean it isn’t beautiful.