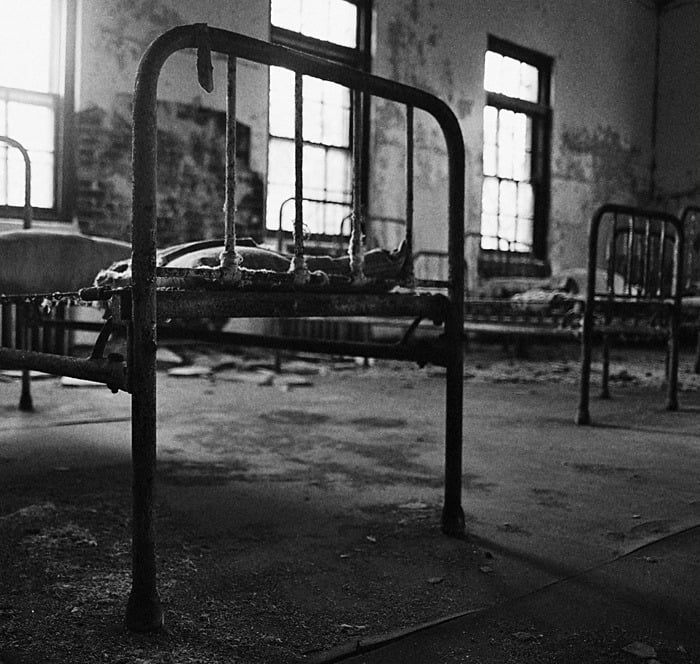 Sprawled across 900 acres in Preston and Norwich, Connecticut was once one of the most notorious psychiatric institutions in the United States. Opened in 1904, Norwich State Hospital — later known simply as Norwich Hospital — originally housed not only people with mental illnesses, but also people found guilty of crimes by insanity. Although it later ended up treating everything from tuberculosis to the geriatric, though, it could never escape its past. Its population for the first several decades, combined with the questionable history of psychiatric care in the United States, means the hospital bore witness to a terrifying amount of unhappiness during its 92 years in operation.

Norwich State was built according to the Cottage Plan, rather than the previously popular Kirkbride Plan. Whereas Kirkbride hospitals consisted of a central section for administration with patient wards radiating off to the sides, giving the institutions a bat-like appearance, Cottage hospitals looked more like a school campus, with a multitude of buildings each housing different types of patient connected via a series of underground tunnels.  Of course, the style underwent a number of changes over the years — it became much more utilitarian in the ‘20s and supersized during the ‘30s before returning to something more akin to its original form — but Norwich State was an example of the earliest version of the form.

When it opened its doors in 1904, Norwich State housed just 95 patients. By 1905, the patient population had grown to 151, and the number of buildings had increased by two. Another building opened in 1907; by 1915, another 13 had been added. The population at that point was more than 1,000 — but the number still pales in comparison to what it was at the hospital’s height: In 1955, there were 3,186 patients receiving treatment at Norwich State.

As was often the case for psychiatric institutions during this era, the buildings weren’t limited to patient wards. In addition to treatment buildings and those housing hospital staff, one building played host to a theatre, cafeteria, kitchen, and dance hall; furthermore, a number of the patient wards were later repurposed to serve as things like a firehouse and a print shop. During a period in which the hospital focused on agricultural therapy, a greenhouse and other agriculture-related buildings popped up. The campus was self-sufficient, with its own power plant, a bakery, and even a bowling alley.

The story is perhaps familiar by this point, but it is worth telling all the same: Overcrowded and understaffed, the institution began using extreme measures to control its population, including extended solitary confinement; additionally, reports of physical and sexual abuse abounded. A number of suicides and murders occurred on the property, and a number of others involving former patients occurred off it shortly after their discharge.

It’s no wonder that, after the hospital developed a reputation for being haunted.

But while it’s true that Norwich State was founded with what’s been called a “difficult” population — those classified as “criminally insane” — that still doesn’t excuse its descent from care into abuse. It doesn’t excuse it in any of the other similar stories at any of the other similar hospitals, either. The manner in which mental illness has been studied and treated (or “treated,” as the case may be) has, I believe, been one of both this country’s and, indeed, humanity’s greatest shame. Yes, we may explain away the troubling history of psychiatric care by saying, “Well, they were doing their best based on what they knew”; at the end of the day, though, the way most psychiatric patients were treated for so long was nothing short of abominable. All patients were treated as prisoners, regardless as to whether or not they were actually criminals, and so-called treatments such as electric shock therapy and pre-orbital lobotomies sought not to understand, but to control. But without understanding, there can be no compassion, and without compassion, there can be no healing.

This history is why there’s still such terrible stigma against mental illness today, and why so many continue to suffer from it in silence.

Norwich State did attempt to turn itself around; Salmon Hall, the maximum-security patient ward, was shut down in 1971, and in the decades following 1955, the patient population was gradually reduced. By 1994, it had shrunk to 649 — but the offshoot of the reduction in patient population is that the grounds became too pricey to maintain for such a comparatively small number of patients. In 1996, the remaining patients were transferred to Connecticut Valley Hospital, and Norwich State was shut down for good.

Not much of it remains now. Although Norwich State was added to the National Register of Historic Places in 1988, the collapse of the tunnels surrounding the administration building resulted in the demolition of much of the property beginning in 2011. Salmon, Awl, Central Theater, Ribicoff, the power plant, the chapel, and a number of cottages had been demolished by 2012; by 2014, the only buildings that remained were Kettle, Lodge, Seymour, Russell, Mitchell, Gallup, Lippit, Ray, Pathway, and Administration. The administration building has been weatherized in an attempt to halt its decay.

No one really knows what’s next for that one remaining building; maybe it will be torn down as well, or maybe time will take care of it on its own. But something tells me that the memories of what the place once was will cling to the land, no matter how much of the hospital itself still stands.