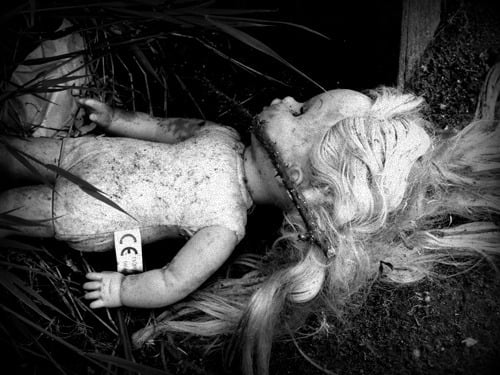 Instructions for how to play a version of hide and seek alone — that is, with with only one player — first began appearing under the name ひとりかくれんぼ (Hitori Kakurenbo) on Japanese horror bulletin boards like the 2ch occult board circa 2006/2007. The craze spread quickly in Japan; the instructions were copied, and pasted, and copied again on site after site, and YouTubers began uploading videos documenting their experiences playing it.

It wasn’t until the fall of 2008 that instructions for One-Man Hide and Seek appeared on an English language site… but perhaps it would have better for everyone if it hadn’t been translated at all.

The rice represents the doll’s internal organs. Additionally, it serves as bait to attract spirits.

The red thread represents a blood vessel and seals whatever spirits you might have attracted inside the doll. Snipping the thread in the Main Event: step 6 releases the spirits.

When naming your doll, do NOT give it your own name. It is also advisable to avoid giving it the name of anyone you know.

Once the game has begun, do NOT do any of the following things until it has been completed:

It is not generally advisable to emerge from your hiding place in the Ending: step 2 without both holding the salt water in your mouth and carrying the cup with the remaining salt water in your hand; should anything have found its way into your home during the course of the game, they will act as safeguards and protect you from any harm your visitor or visitors may attempt to inflict upon you. The purpose of the television is to alert you to the presence of these potential visitors. Should it begin to display abnormal behavior, do NOT, under ANY circumstance, leave your hiding place without the salt water.

Do not allow the game to go on for longer than two hours.

Once it has been started, the game MUST be played through to completion. Do NOT attempt to abandon it partway through. To do so would result in disaster.