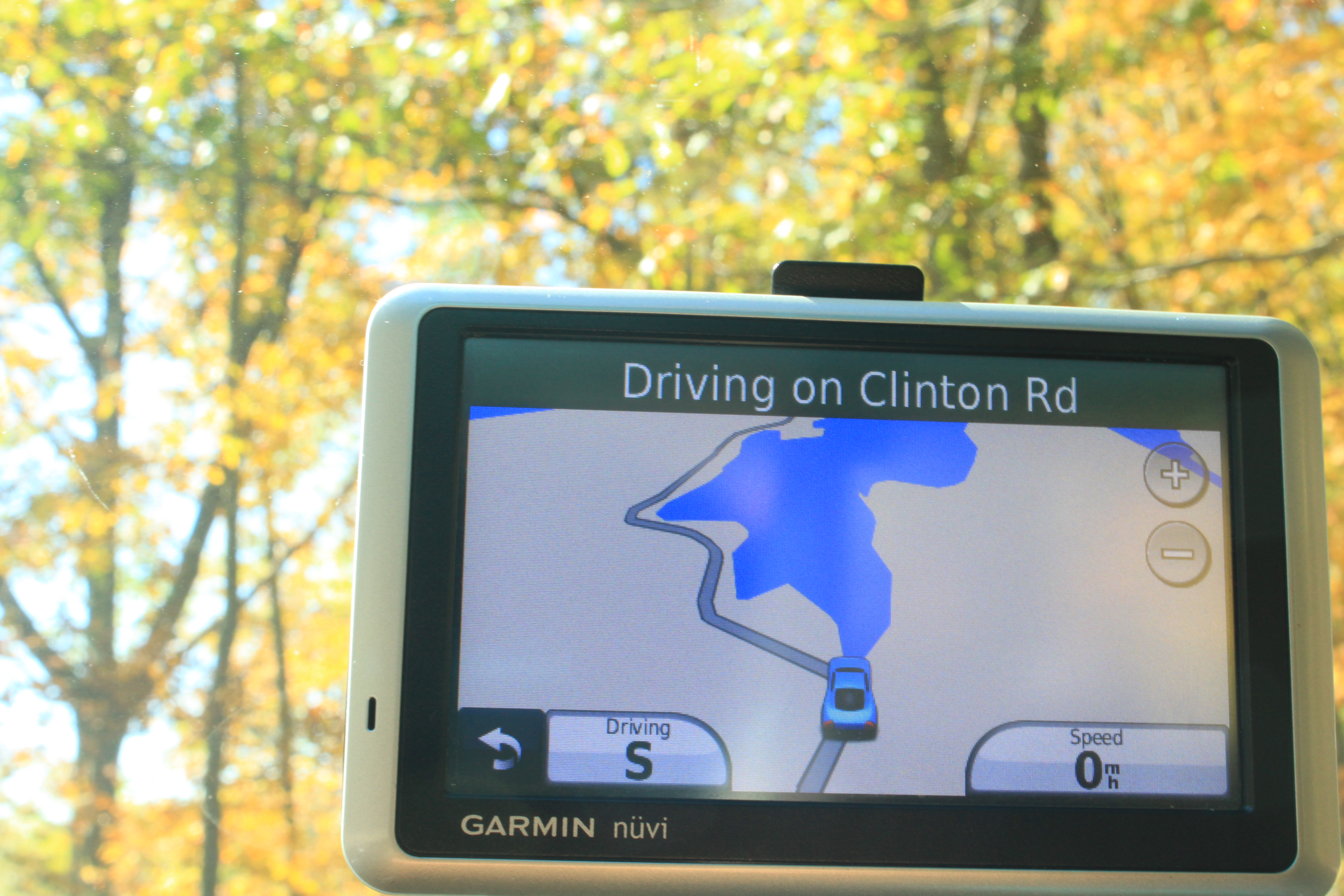 Finding Clinton Road was trickier than it looked.

We set out from Beacon at 10 o’clock in the morning after filling up on eggs, French toast, and what was probably far too much coffee at the Beacon Bread Company. (You should go there, by the way — it was amazing.) It’s not that the route was particularly difficult to navigate — and in the era of GPS, you’re never really lost, anyway — but when you approach from the north, the turn off of Warwick Turnpike in West Milford, New Jersey is so blind as to be almost invisible. We ended up having to backtrack — something which would be a recurring theme for this part of the trip — eventually finding the left hand fork that led to the fabled road from the southeast.

The first thing you’ll notice upon reaching Clinton Road is how residential the road is. I can’t help but wonder what it’s like to live on a road with all those stories attached to it — or moreover, what it’s like to tell people you live on it. After you travel a few miles south, though, the houses and neighborhoods vanish, leaving you with the winding, secluded, tree-lined path of legend. This time of year, it’s awash with flame-colored foliage, red, orange, and gold; but underneath the beauty lies danger, a treacherous road full of curves that can’t wait to see you spin out of control or get side-swiped by another careless driver.

If you’ve ever seen any pictures of Ghost Boy Bridge, you’ll know it as soon as you spot it. That’s what happened to us: We rounded the curve, the guardrails came into view, and I gasped. “That’s it,” I said, and Anjoli pulled the car over. It’s just as well that we were able to identify it on sight; somewhat ominously, my cell phone had lost the signal shortly after we had turned onto Clinton Road. 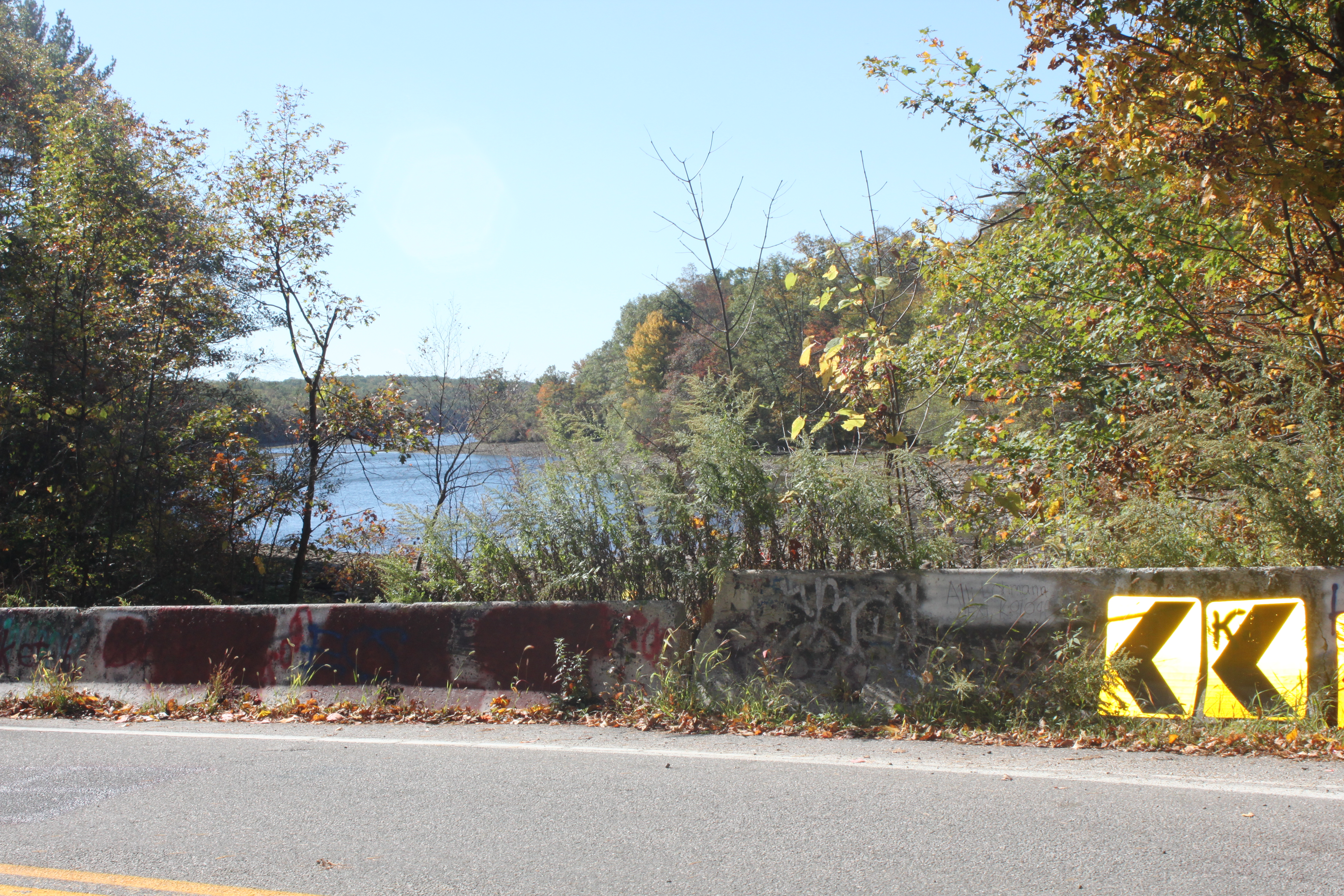 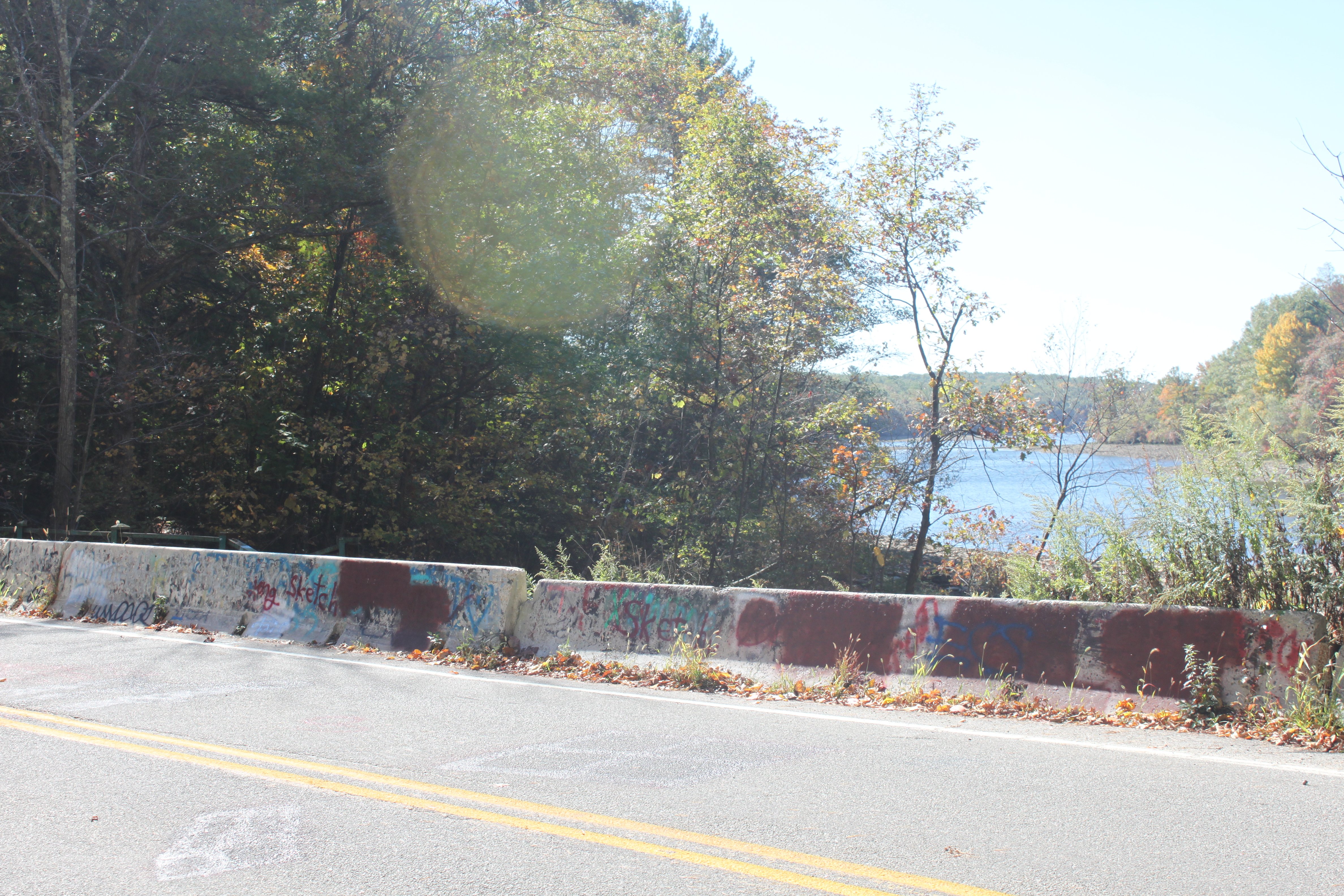 We weren’t the only explorers on that particular day — another car was parked beside the bridge, just in front of where we had pulled up — but its occupant was seemingly less interested in the legend and more interested in the area’s natural beauty. We spotted whoever had arrived before us some ways out, roaming the creek bed that ran beneath the crossing. 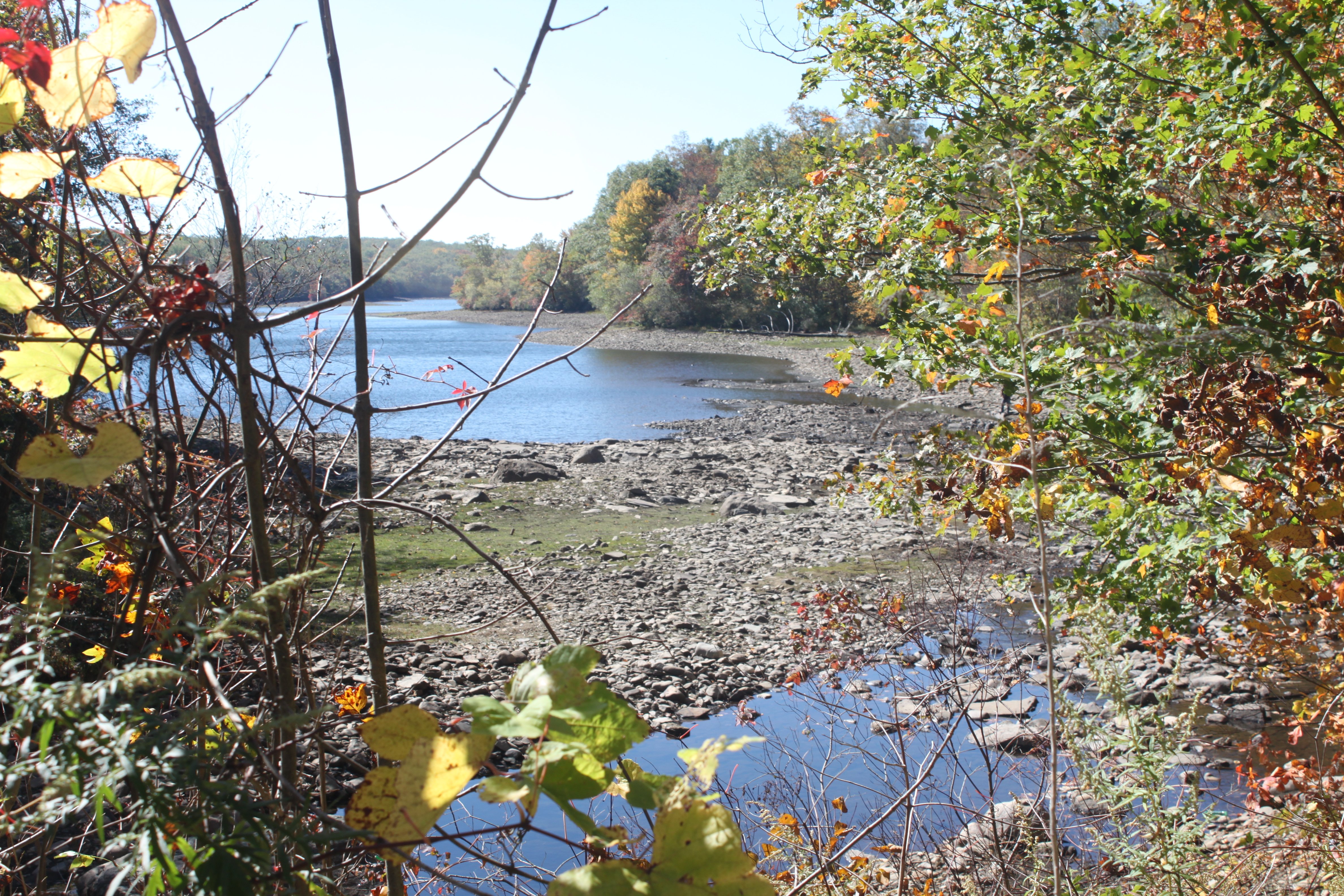 “No Parking — Private Property” signs plastered the tree trunks surrounding us, so we kept the car running and worked quickly (there’s nothing quite like the surreptitious to give an edge to an otherwise mundane activity).  Although the ghost boy is often said to give his visitors a gentle push, I felt nothing; nor did I hear any odd noises. A tree branch did snap off and drop to the ground near a Hello Kitty doll someone had strung up in a tree, echoing the incident on the island — but again, I’m fairly certain both instances can be chalked up to the deluge of rain the day before. 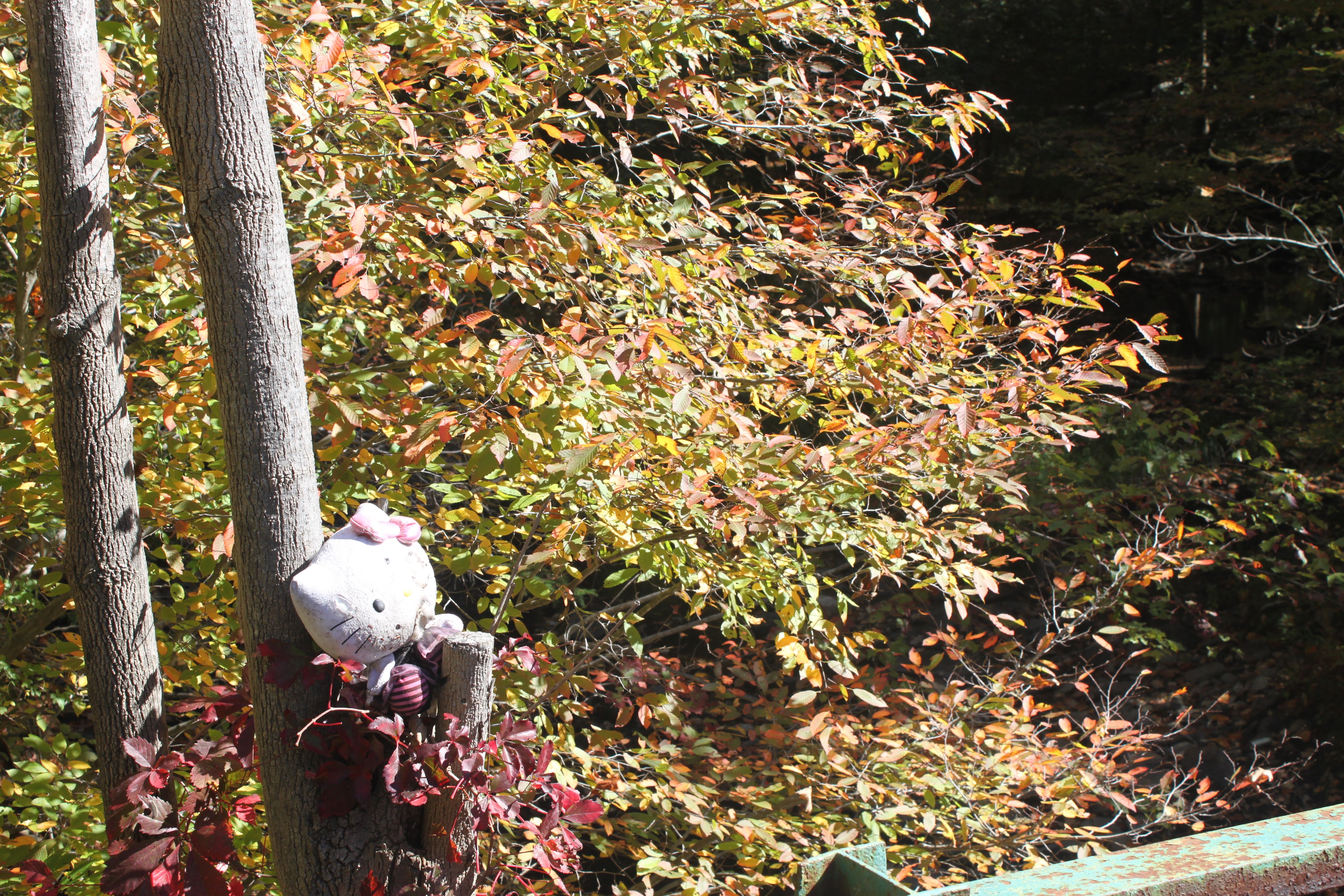 The legend says that any coins flipped into the stream from the bridge at midnight will come flying back through the darkness, returned by the ghostly boy who dwells beneath the crossing; it didn’t seem right to me to leave something behind in nature that wasn’t supposed to be there, though, so accordingly, I left my offering on the guardrail. Either the boy will find it, or someone else will. It’s anyone’s guess whether it was still there by midnight that night. 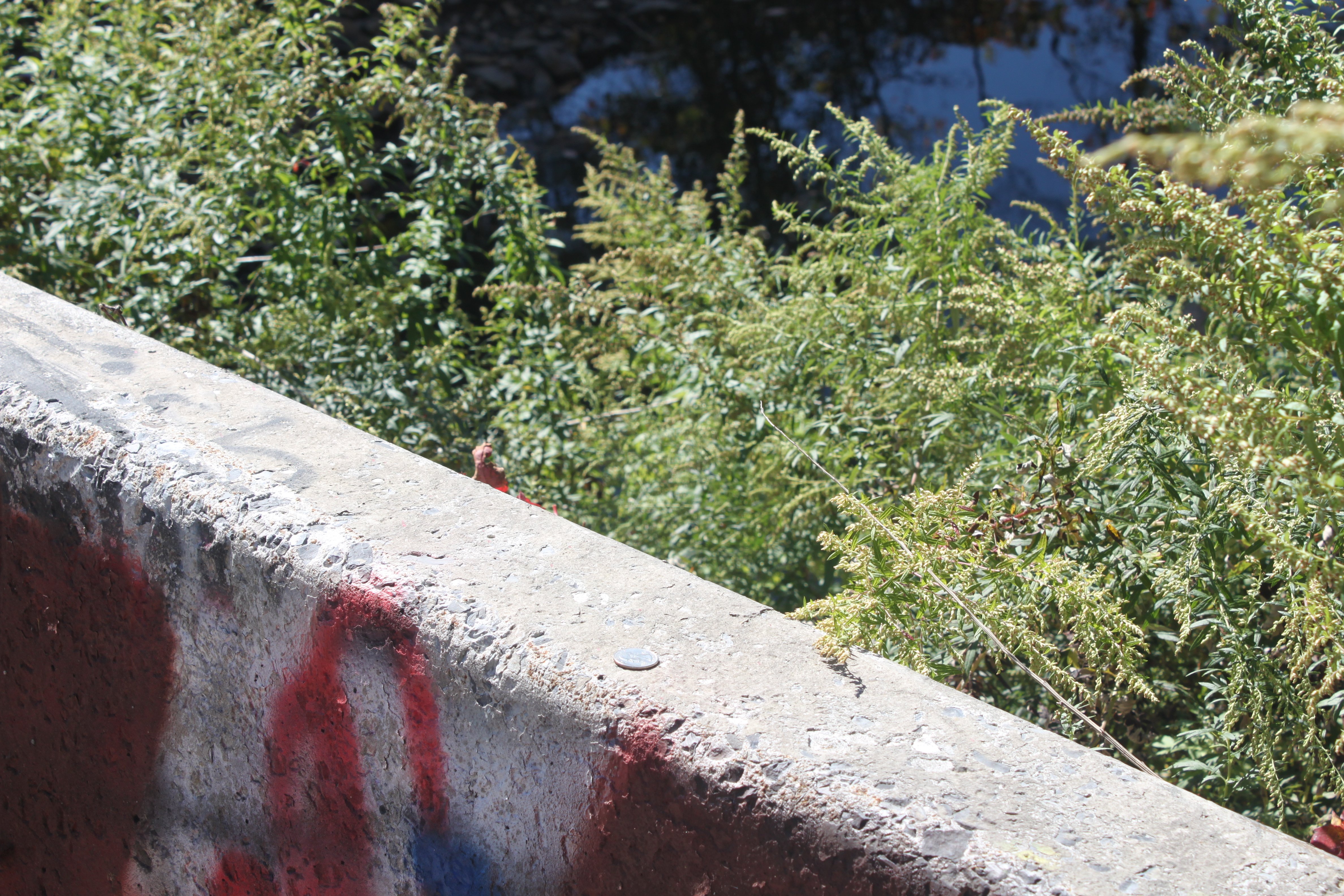 Clinton Road is better traveled than either of us were expecting it to be, so in retrospect, perhaps we should have been prepared for what happened next… but we weren’t. After exploring the bridge for as long as we dared, we got back in the car and continued driving south — only to have a huge, beige, SUV come barreling down the road from the opposite direction. In spite of the fact that Clinton Road is undoubtedly a path best traversed cautiously, the SUV raced past us at a stupidly high speed, leaning so far out of its lane that it’s a minor miracle it didn’t take us out on its way by. We cursed — loudly — as the car whipped around the bend, vanishing out of sight behind us. Apparently we had found Clinton Road’s Dead Man’s Curve — and it definitely lived up to its name. 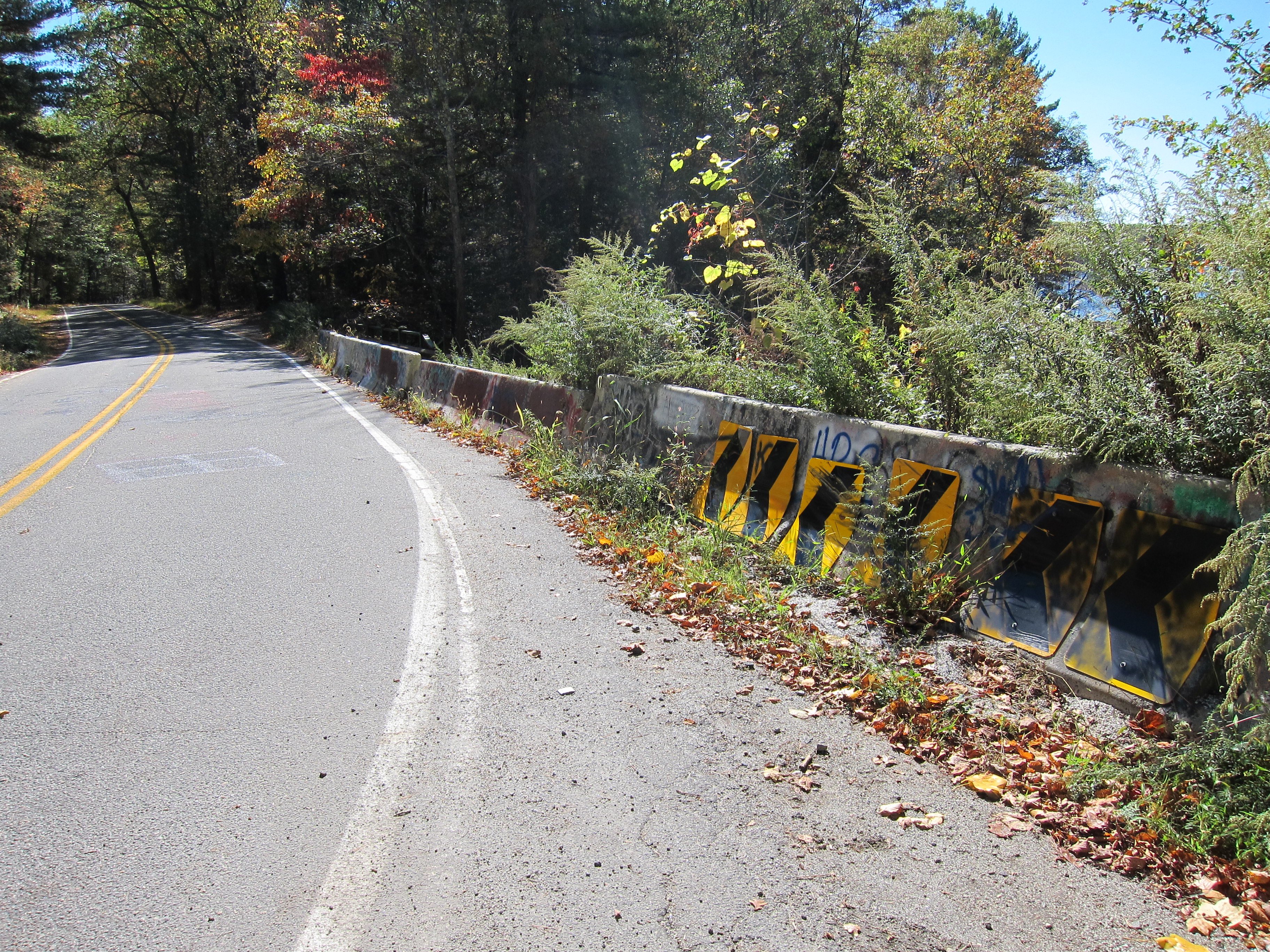 But we continued onward, our hearts palpitating wildly. Next stop: The Clinton Furnace, although we had only the roughest idea of where we might find it. Luckily, it was easier to identify than we anticipated; just south of the Clinton Reservoir and opposite one of the only turn-offs this far down the road (Google Maps tells me it’s called School House Cove Road), it’s visible from the main road itself as you drive by. Finding a place to pull over, though? Not nearly as easy.

We actually ended up traveling the remainder of the road, keeping track of possible parking spots as we went. We knew we have gone too far when we finally reached a house — although I’m not sure I really want to know whose house it was. Huge and hulking, it had clearly once been a very fine place indeed; it had since gone to seed, though, its paint peeling, its walls sagging, and its shingles rotting. The windows were blocked by ragged curtains, although one window on the top floor bulged curiously outward.

We used the house’s driveway to turn around, crossing our fingers that its occupants wouldn’t emerge from within, shaking pitchforks at us for disregarding the “PRIVATE PROPERTY” sign pinned to the fading door. I’m not kidding when I say it looked like the kind of place Leatherface might like to call home — although what use Leatherface would have had for the brand-new pickup truck parked out front remains to be seen. But we turned around without incident, backtracking to the spots we deemed acceptable parking areas earlier. After one false start, we pulled into a small shoulder paved with fallen leaves and went the rest of the way on foot. 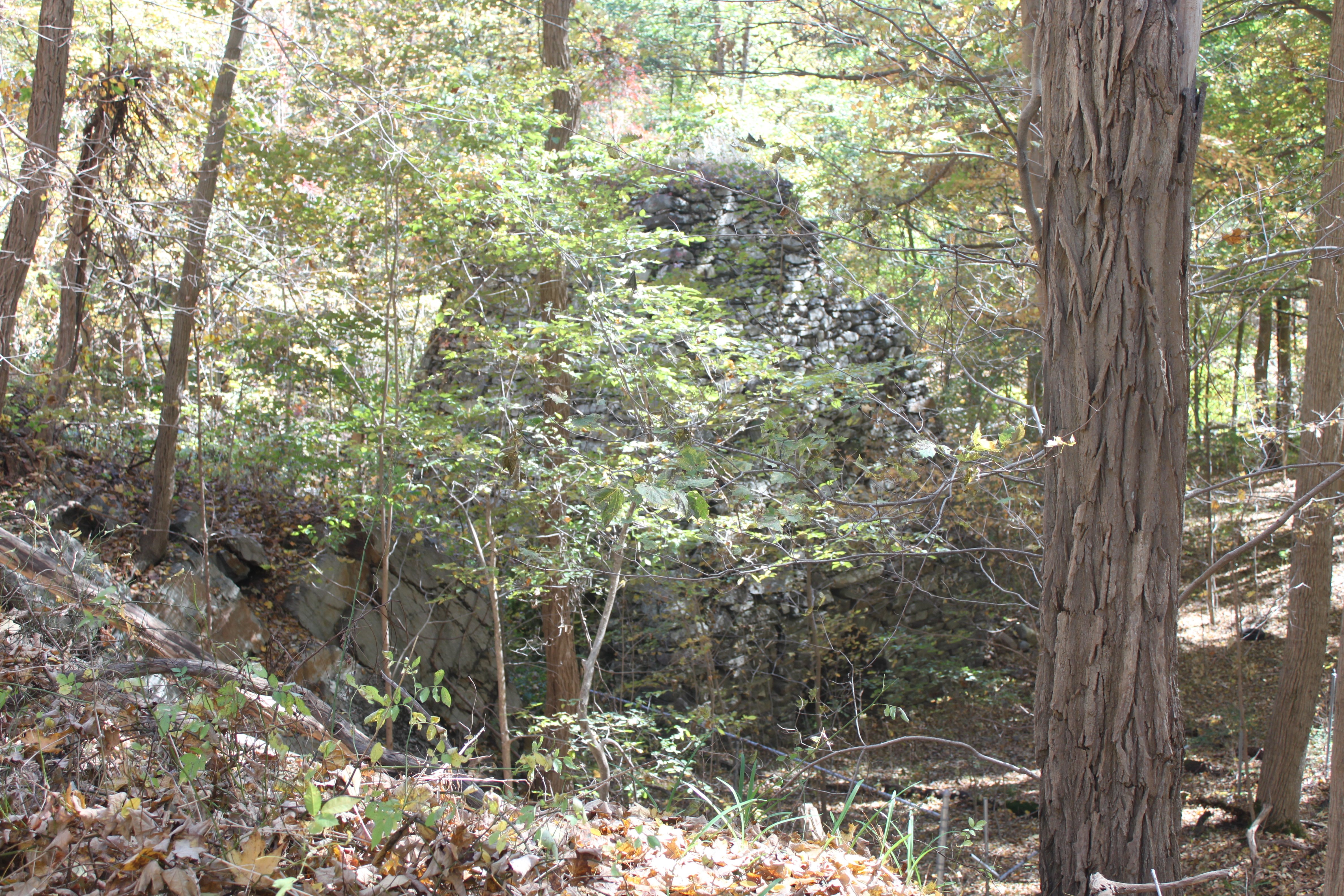 Not going to lie: Seeing the conical stone structure rising up out of the forest is a little unreal. Built in 1826, the Clinton Furnace was added to the National Register of Historic Places in 1976; as such, a plaque stands by the side of the road overlooking the structure itself, identifying its importance. It may not be a Druidic temple, but that doesn’t make it any less impressive. We take a lot of things for granted these days, including the construction of buildings — but when you look at something like this and see that it was built with little more than a few rudimentary tools and a carefully collected store of rocks, it’s almost humbling. The amount of care it must have taken to bolster each misshapen rock with another that just fit in the empty slot… let’s just say that it makes you think. 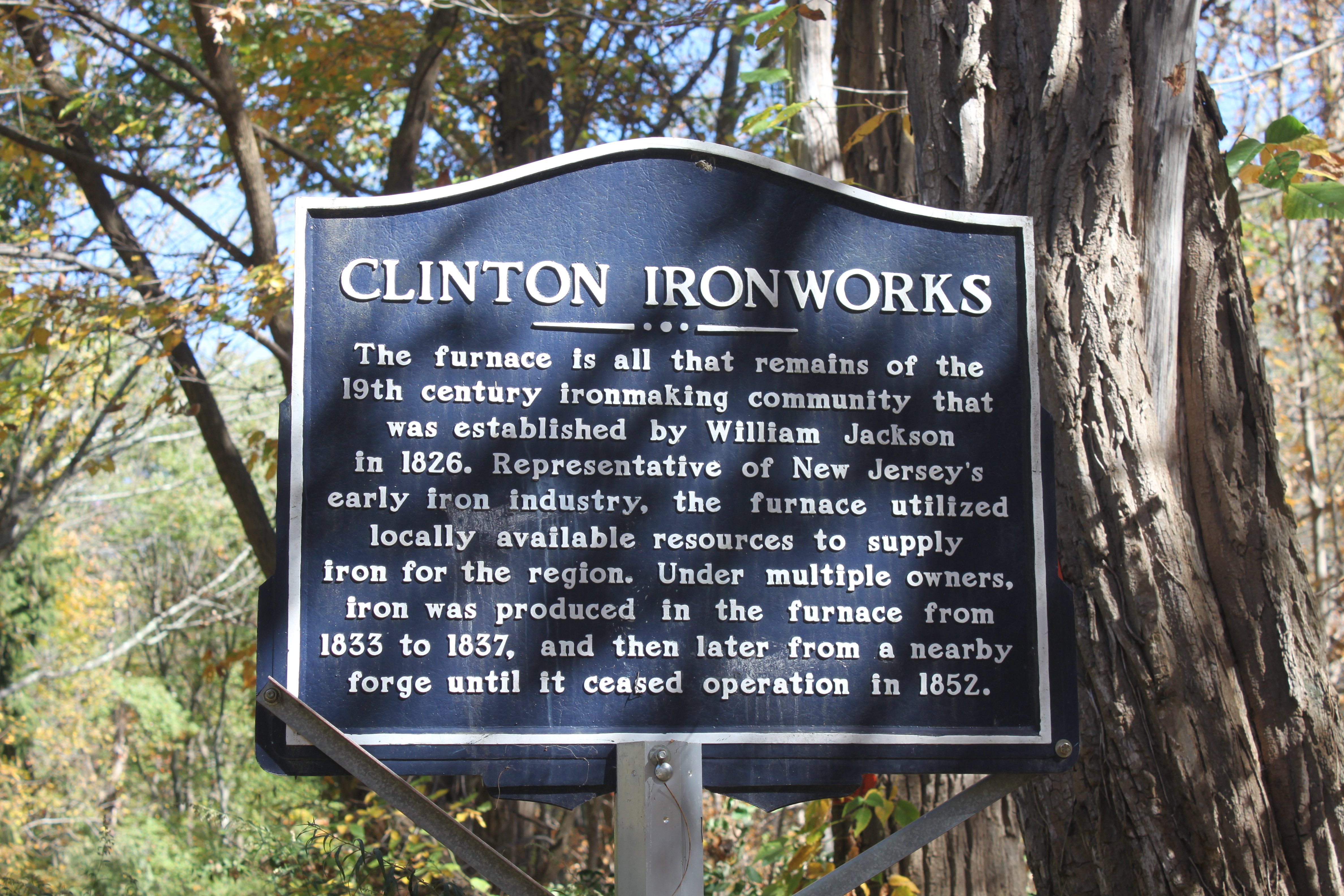 Weirdly, the area around the furnace smelled overwhelmingly of sulfur. A yellow post driven into the ground served as a “Danger — Natural Gas” marker, but the coincidence is difficult not to raise a brow at. It’s also worth noting that there was once a chain link fence surrounding the furnace; it’s been pulled down, though, no doubt by other thrill seekers, directly in front of the furnace’s opening. Anjoli and I were both a little too afraid of getting caught trespassing to venture beyond the fence’s boundaries. 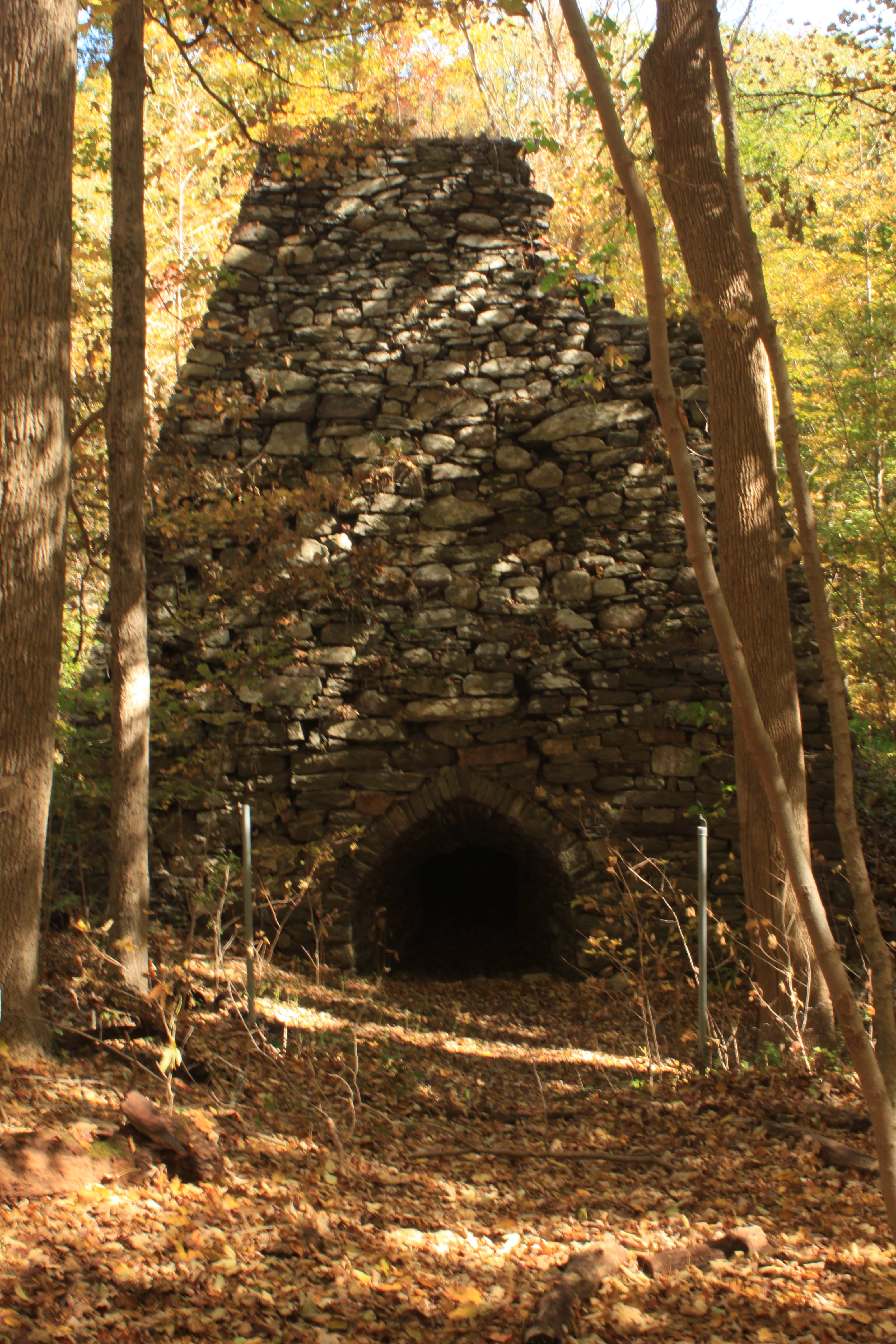 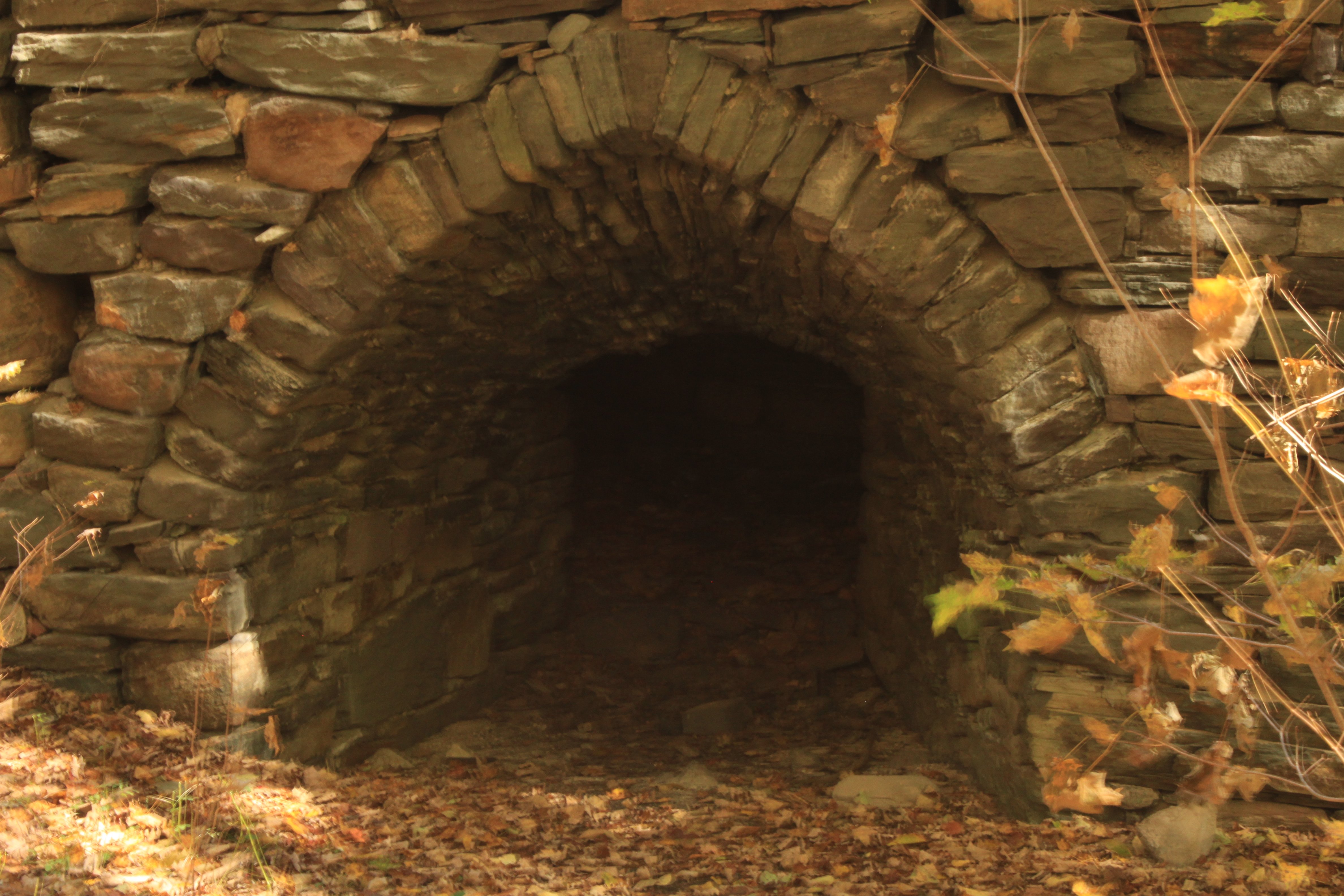 Strangest of all, though, was this: By the side of the road near the furnace, half-buried in the leaves, was the hubcap of a car. 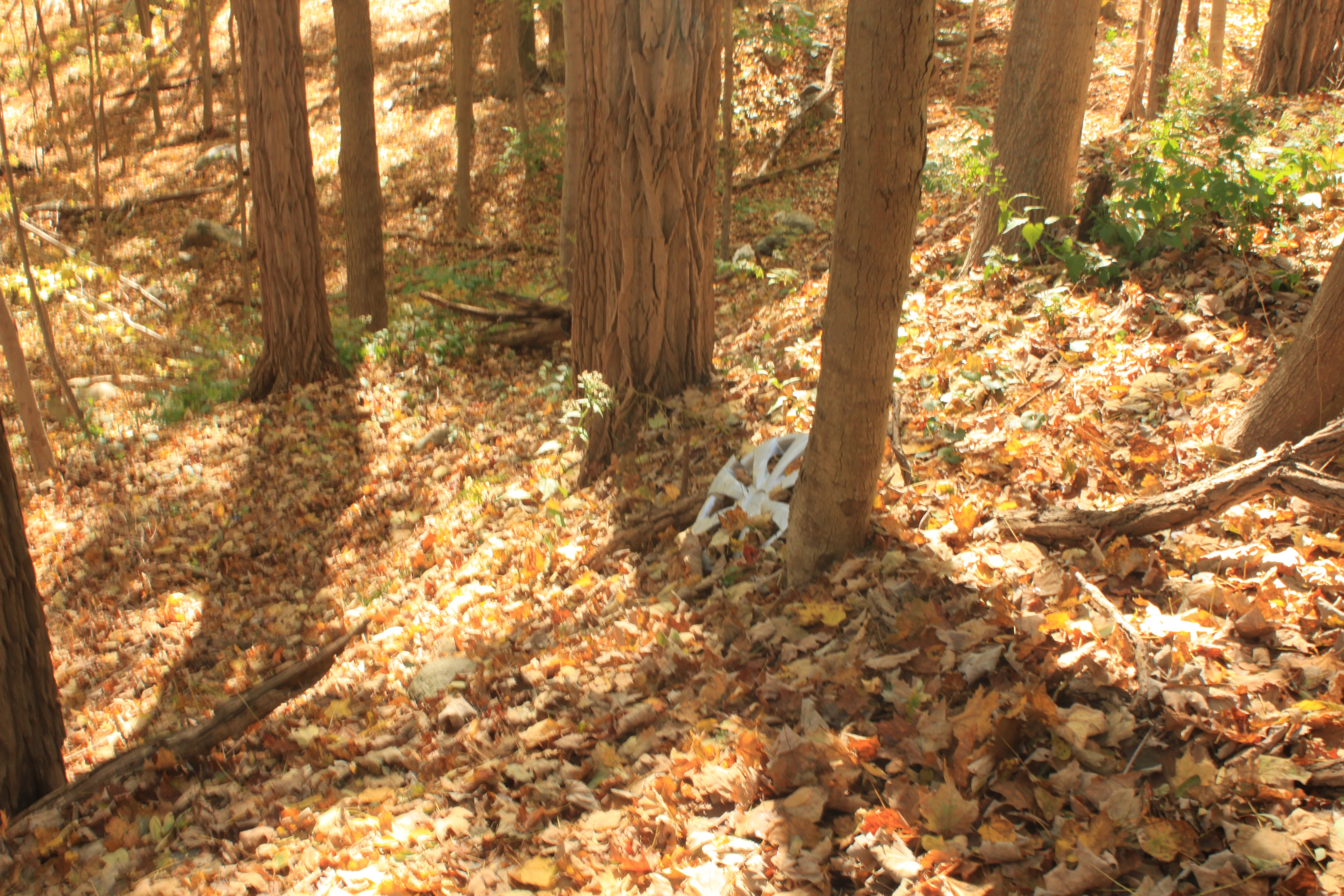 Near that, we found part of a headlight embedded in a tree trunk. 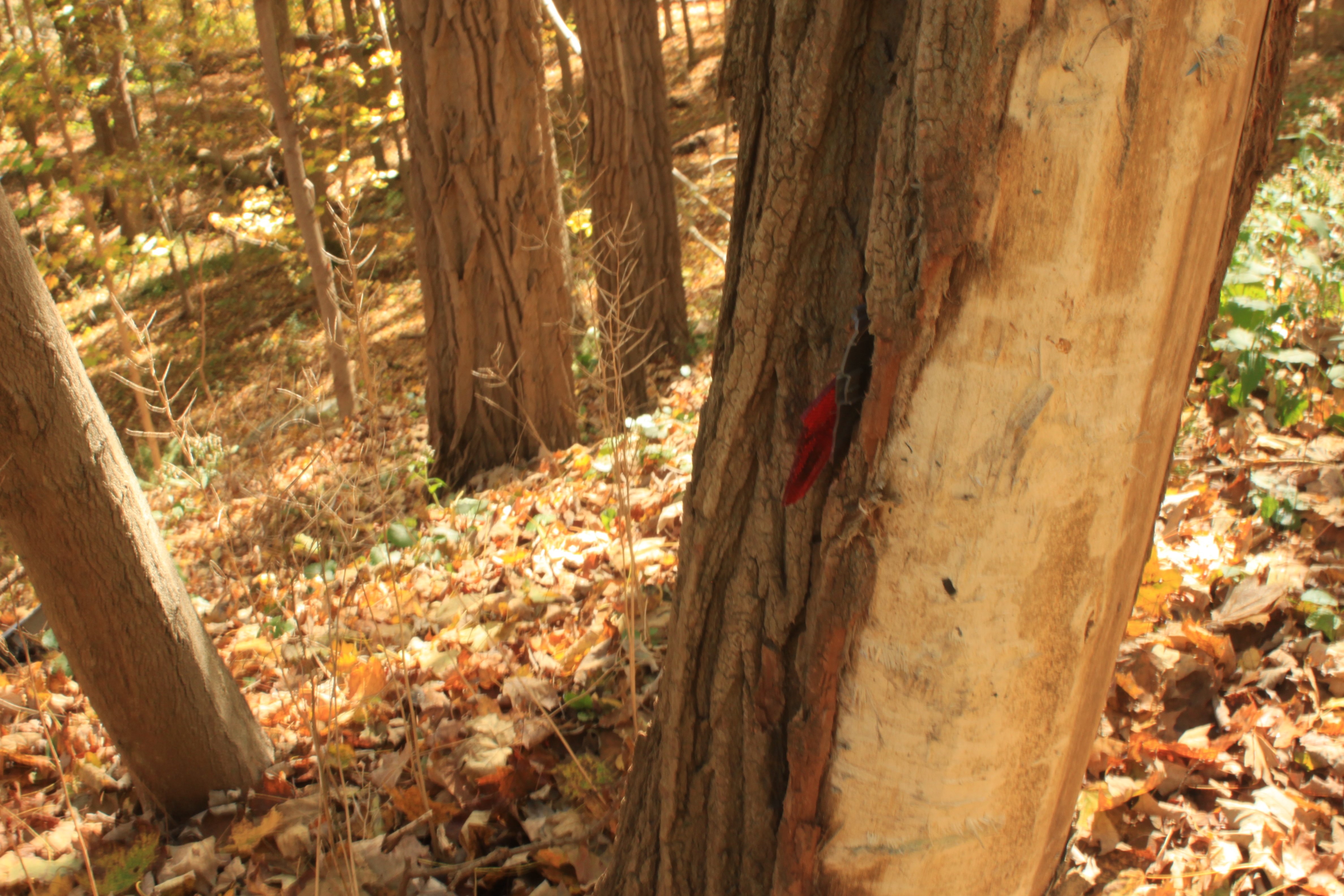 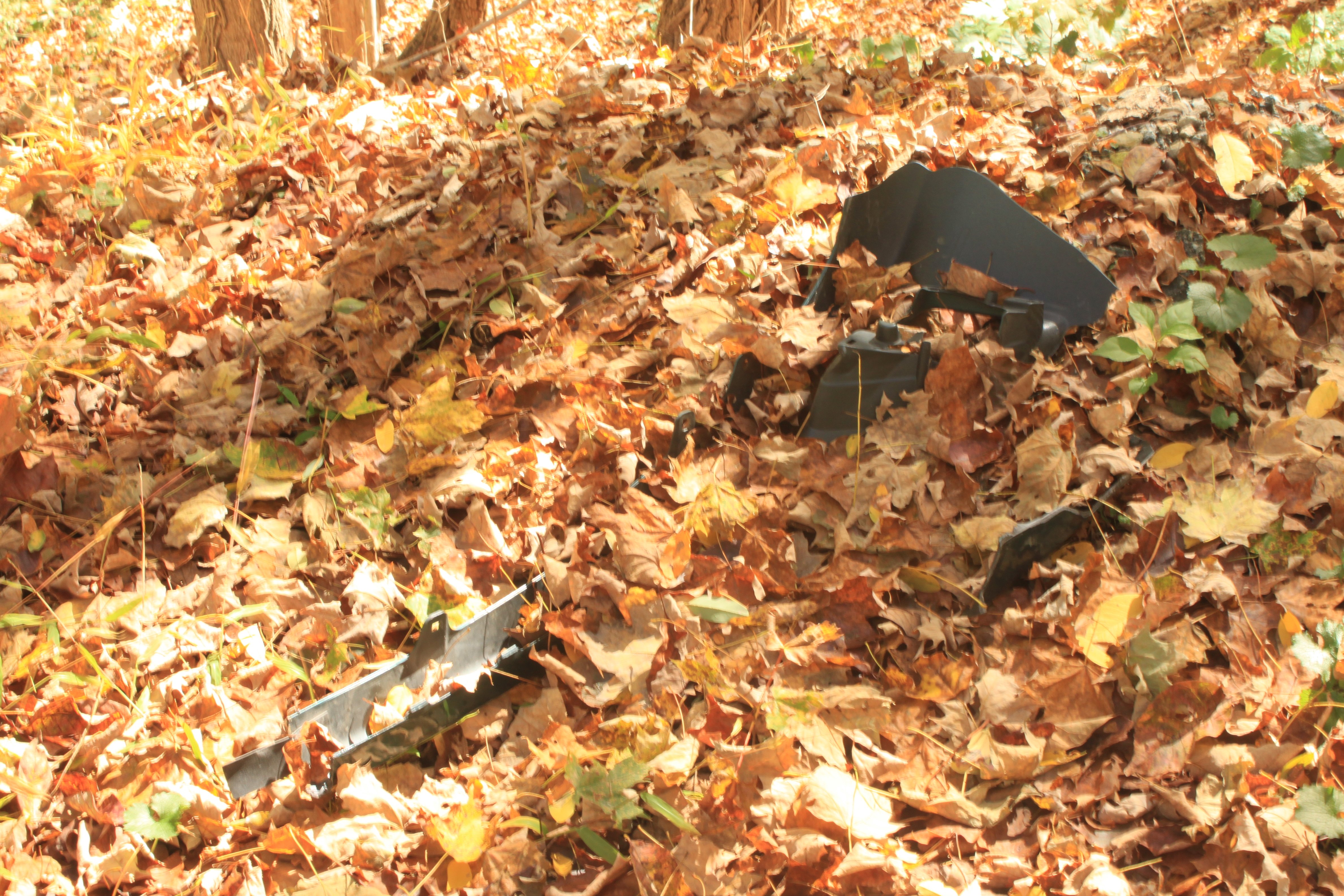 …And directly next to the furnace itself was a collection of mangled tires. 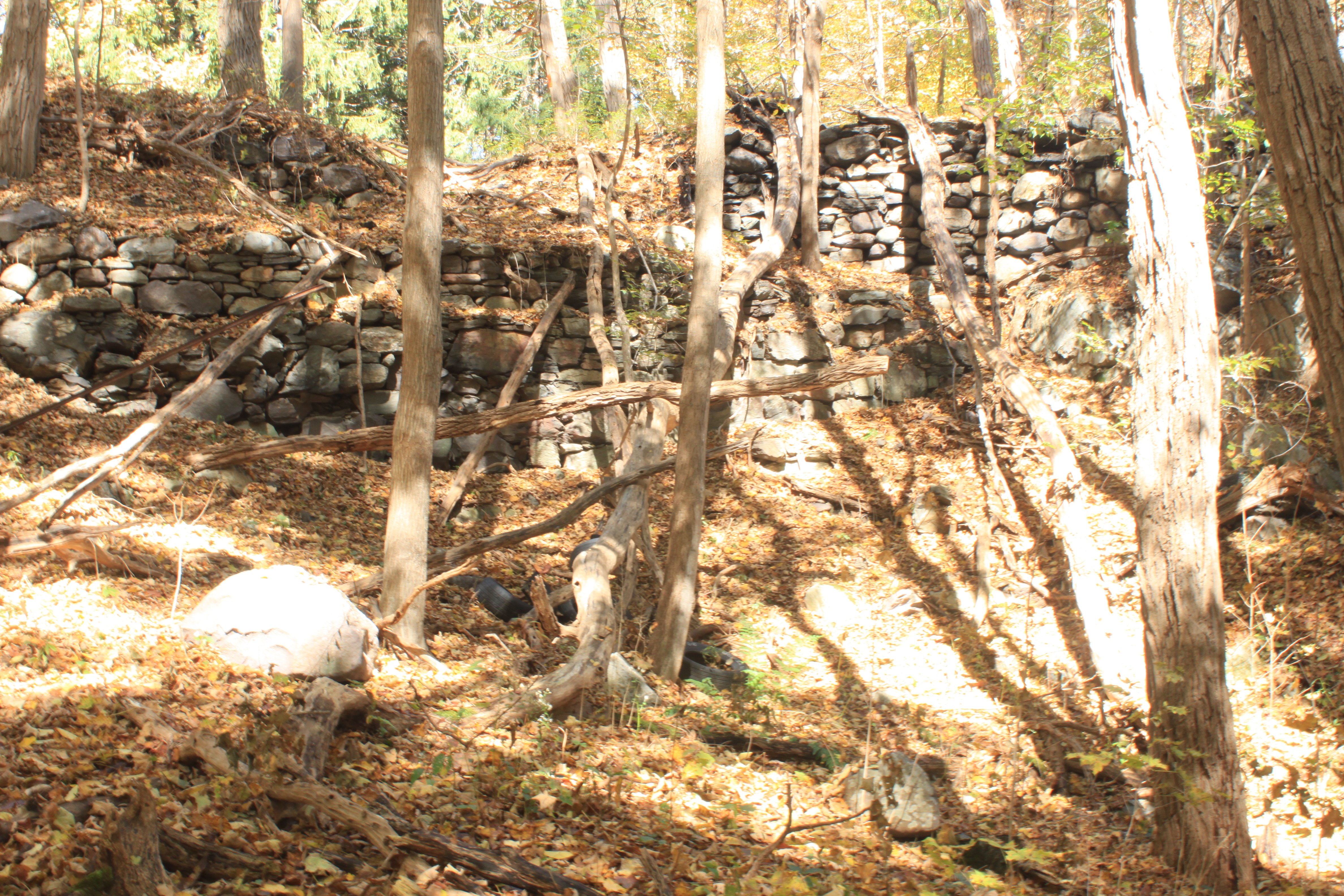 Part of me can’t help but think those items must have been planted by some trickster hoping to fuck with people like me who go chasing the ghosts of Clinton Road. But maybe they’re not just props. Maybe they’re real, the leftovers of another victim of the road’s treacherous curves. Maybe it’s proof that yet another soul has joined those who reside on the most terrifying road in America.

And with that thought burning in our minds, we got back in the car and turned our sights towards home. 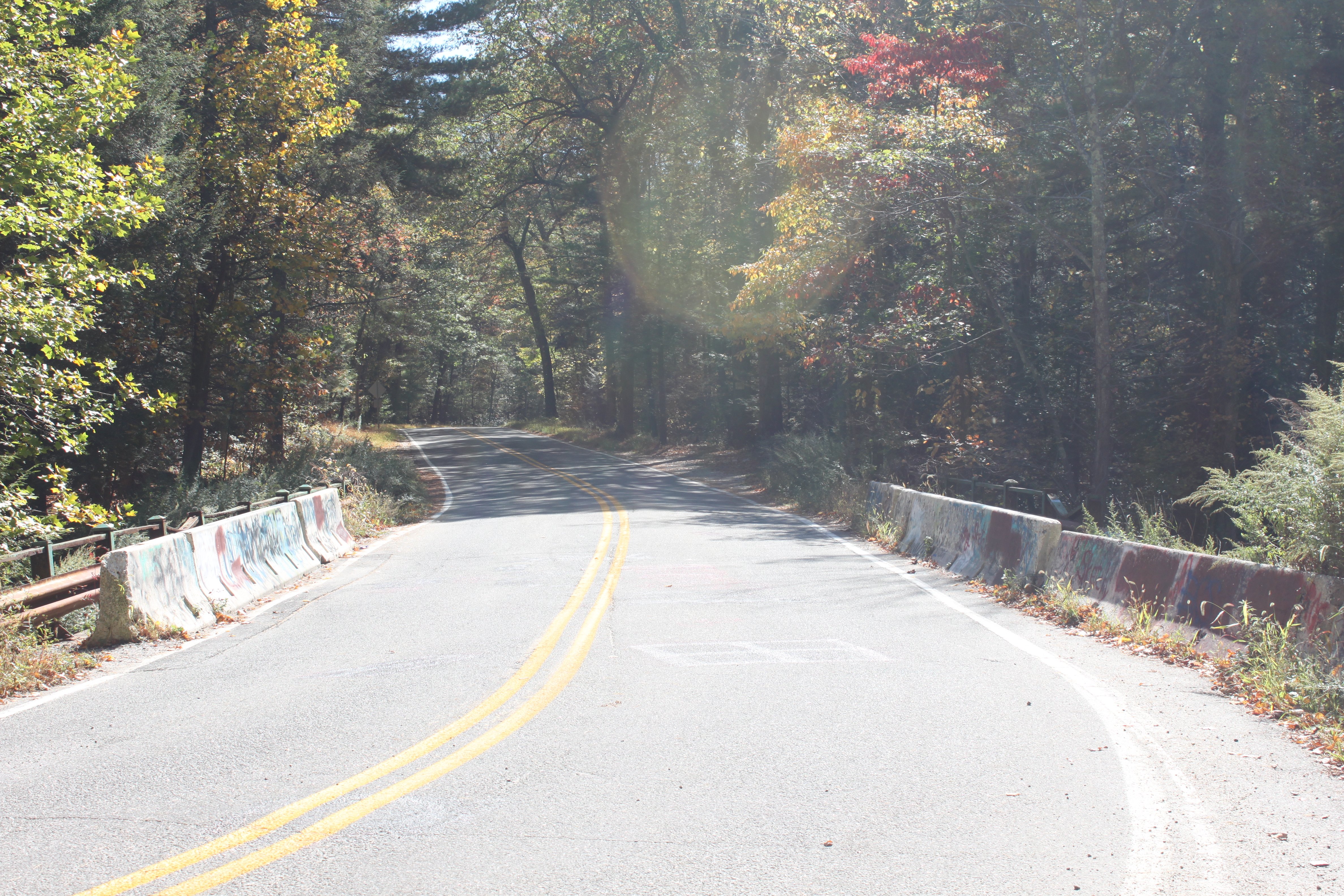